The curiosity over the first look and who’s going to be the main actor of Gundala movie has been revealed. The puzzles were announced through the event of Indonesia Comic Con 2018 which held at Jakarta Convention Center (JCC) Senayan, on Sunday, 28 October 2018.

In the event that attended by the director Joko Anwar, the first look of the movie officially shown to public. It started with a deep conversation between little Sancaka and his father. “if we stay silent when we see injustice in front of our eyes, that means we are no longer a human being”.

Sancaka as the main character who has appeared in the movie entrusted to the famous actor Abimana Aryasatya. The physical appearance and the martial art skills mastered by Abimana considered apropriate to portray Sancaka/Gundala as Indonesian hero who fight back the crimes.

Not only Abimana, there were several actors who also introduced in Indonesia Comic Con 2018, they were Muzakki, Tara Basro, and Bront Palarae. Joko Anwar has not explained about their characters. The rest of the characters and the other casts still kept as a secret until the next announcement. 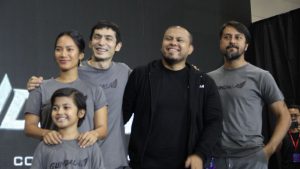 For now, there isn’t much that can be said by Joko Anwar, Abimana, and the other casts about Gundala. But this Indonesian action film will tell about the origin of Gundala and how he carry out the responsibilities as a hero. In the hands of Joko Anwar, Gundala movie is guaranteed to be interesting cinematic presentation because we provide the iconic character and the relatable storyline that will be packaged in a millennial way to gain the young audiences.
<ani>

Joko Anwar, born January 3, 1976 in Medan, North Sumatera, has been enjoying commercial and critical success as writer and director. The first film that he wrote, Arisan! (2003) won numerous awards at home and abroad and was hailed as a groundbreaking movie in Indonesia. His directorial debut, Janji Joni (Joni’s Promise, 2005) was box office smash comedy and was highly praised by international critics. His next film, the genre-bending Kala (2007) was named one of the best films of the year by Sight and Sound magazine who cited him as one of the smartest filmmakers in Asia. His third feature, Pintu Terlarang (The Forbidden Door, 2009) won top prize at Puchon International Fantastic Film Festival and internationally acclaimed. His next film, Modus Anomali (2012) broke out into international market and also won praises from critics. His A Copy of My Mind (2015) competed at Venice International Film Festival and Toronto International Film Festival in 2015. His first horror feature, Pengabdi Setan (Satan’s Slaves) broke record as the highest grossing Indonesian horror film of all time and was the highest grossing Indonesian film in 2017 and was sold to more than 42 countries and won the most awards in Indonesian equivalent of The Oscars. The film also recorded the highest grossing Indonesian film released in other countries including in Malaysia.