Saying that the “thunder storm strikes” Indonesia Comic Con 2018 might be a little bit exaggerated… but the truth is, it does not discourage the visitors to come to the booth of Gundala the movie.

Held at October 27th – 28th 2018, Indonesia Comic Con is the biggest pop culture exhibition event in Indonesia. They came directly to ‘the eye of the storm’: Gundala the movie booth, right in front of the entrance of Hall B, Jakarta Convention Centre. At the certain booth, the visitors can do a selfie whatever they like and get rewarded by a limited edition comic book. To get this movie-related free – yet exclusive – comic book, all they have to do is to upload they photo to their Instagram account with hashtag #gundala.

Just because the long-time fans of Gundala and other visitors do not like to come home empty-handed, they enthusiastically bought the official movie merchandises sold at the booth: posters, tumbler, drawstring bag, and stickers with Gundala logo on it. Official t-shirts with two different stylish design also sold at alarming rate.

October 28th may be considered as the peak of Indonesia Comic Con 2018, as Joko Anwar came to the venue with several casts of Gundala the movie. Heading to the Empire Stage, Joko also brought Abimana Aryasatya, Tara Basro, Bront Palarae, and Muzakki Ramadhan with him.

Not only introduced them and their role, the 20 seconds first look of the movie also being displayed for the public at the first time. The audience were – dare we say it – thunderstruck by it.

Thank you, Indonesia Comic Con 2018 and all of Gundala fans out there… see you next time!
<FN,GS,IM> 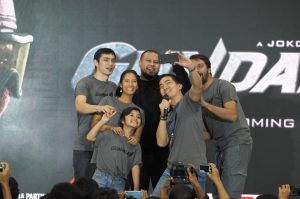