Director Joko Anwar will direct a movie based on Gundala Putra Petir, a popular Indonesian comic by Harya Suraminata, also known as Hasmi.

According to Kompas, Joko said this was a dream come true.

“I grew up with Gundala, and I prayed that someday I could produce the movie. Alhamdulillah (Thank God) I was given the chance. The movie is currently in its preproduction phase,” said Joko in a press conference on Wednesday. 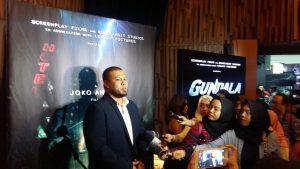 The director also said he had several candidates in mind in terms of casting.

“We are finalizing the candidates. In a week or two, hopefully we can announce them. Shooting will begin in September or October, which means the movie will be released in 2019,” he added.

Production company Screenplay Films and BumiLangit Studios in association with Legacy Pictures are collaborating on the movie. Joko said he was not interested in putting Hollywood superhero ideas in the movie, preferring local Indonesian trademarks.

He posted the movie poster teaser on Instagram, saying, “My seventh movie. I ask for your support and blessing, friends.”

Gundala Putra Petir, first published in 1969, told the story of Gundala, an alter ego of Sancaka. An engineer who secretly experimented with an antilightning serum, one day he was struck by lightning and was bestowed with a superpower by a creature from another planet. From then on, he was able to emit lightning from the palm of his hand.

An movie adaptation based on the same comic was released in 1981, directed by Lilik Sudjio. (wng)
Source : JAKARTA POST,apr 05 2018