On the 13th and 14th of May, the comic and creative community of young people in Bandung once again held an event called PAKOBAN, in Bandung Comic Market for 2 consecutive days.
On the first day, Goklas Oyas Sujiwo who represent bumilangit during the event in Bandung became one of the discussion members panel entitled “The future of comics in the film industry” with Faza ” Meong” and Ari Julianto.

On the second day, Oyas go back on stage to present the profile of Bumilangit’s digital content products to be released mid-May 2017 through Facebook’s.
We call this a [r]evolution in the Indonesian comic scene world, the first and only one initiated by Bumilangit to showcase Indonesian superheroes in digital content that have been regenerated to for the readers.
The return of the legendary comic character ’Si buta dari Gua hantu’ has been long waited from the devoted fans. 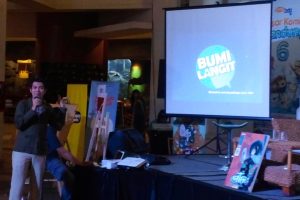 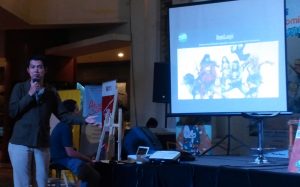 Digital content comics is specifically designed for mobile users that can be access through the facebook fanpage Bumilangit with free of charge.
Going forward on a regular basis, Bumilangit_komik will continue to release all comic episodes and also displays a series of characters under Bumilangit.